A collision between two passenger express trains in Sindh’s Ghotki district killed at least 40 people and injured scores more on Monday, with the death toll likely to rise as rescuers were still trying to access several mangled coaches.

Ghotki SSP Umar Tufail said the toll rose to 36, and that his men could see four more bodies stuck in the wreckage.

“We have not been able to take them out so far, but an operation is underway for that,” he told reporters at the site. “We have saved three more people; they are injured,” he added. 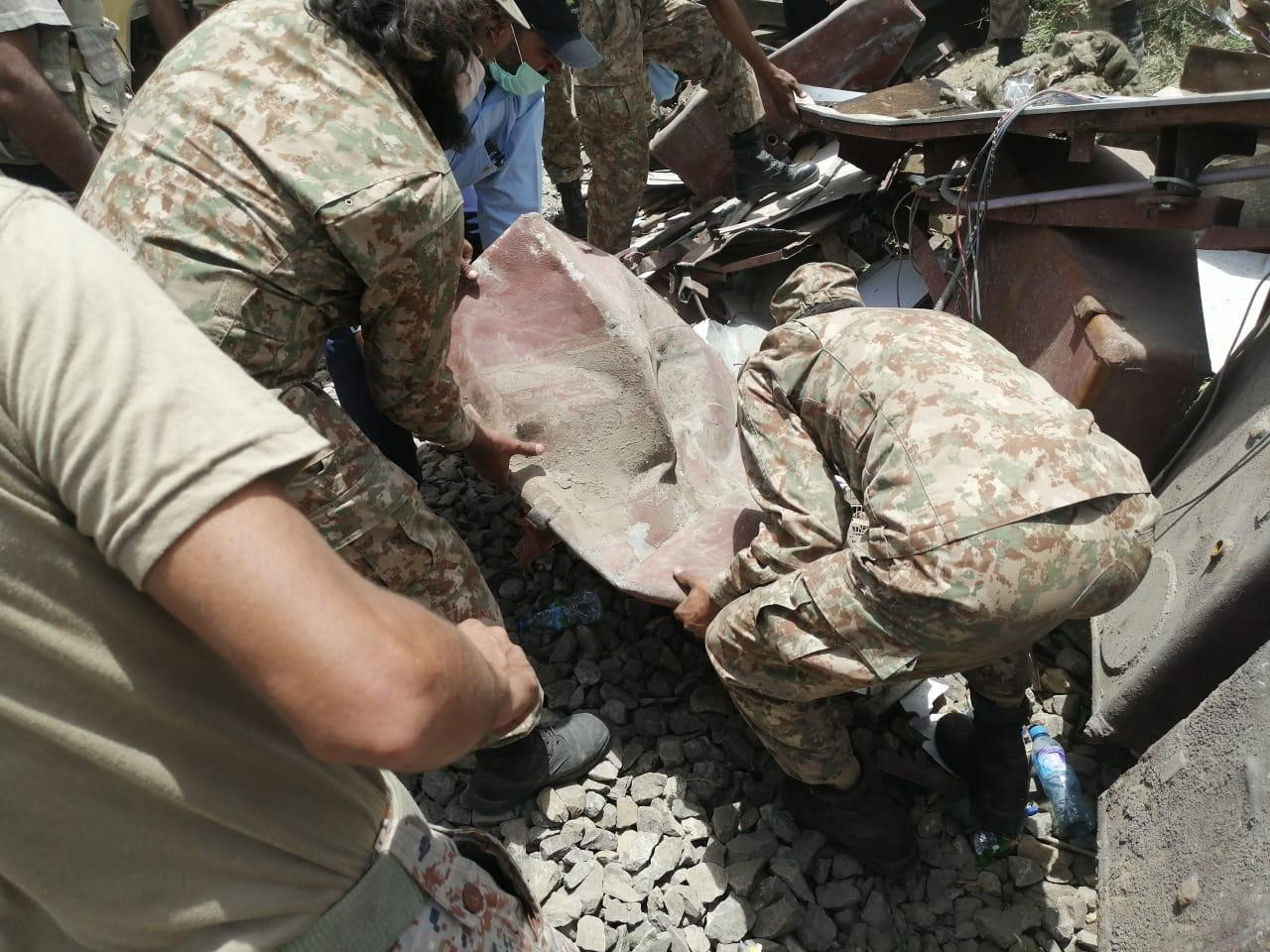 According to Pakistan Railway (PR) officials, the collision occurred between the Millat Express, which was en-route from Karachi to Sargodha and Sir Syed Express, coming from Rawalpindi. The mishap occurred between Raiti and Obaro railway stations.

A spokesperson of PR added that the accident occurred after the coaches of one train, the Millat Express, derailed and fell across the opposite track, where they were hit by another train, the Sir Syed Express.

“The driver tried to apply emergency brakes but the locomotive hit the infringing coaches,” the railways said in an initial report. 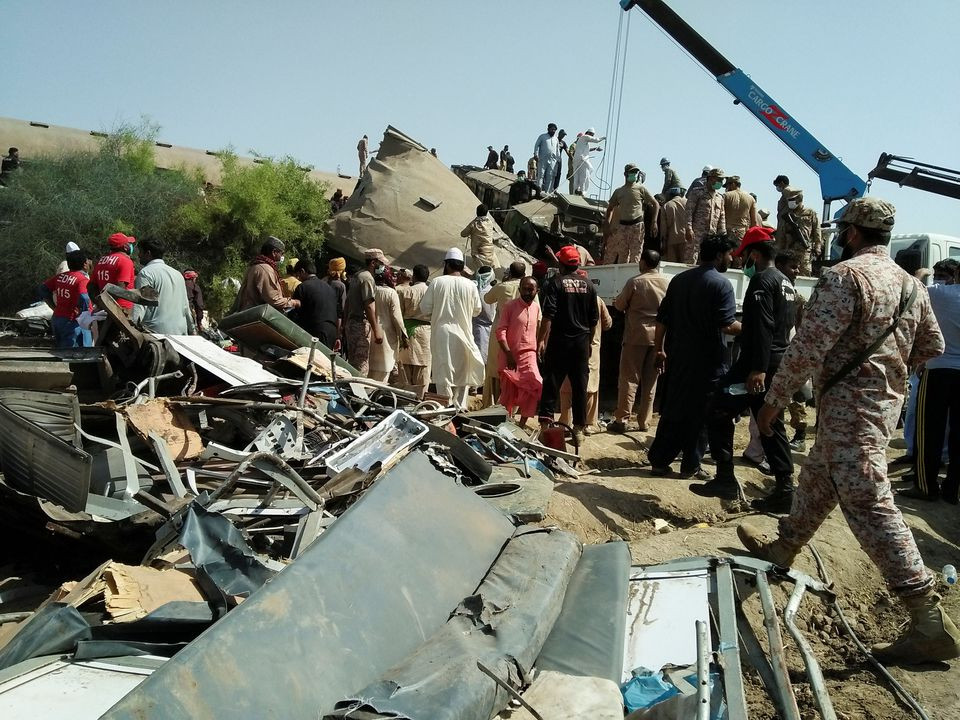 A rescue train reached the site hours after the fatal crash. Officials were still trying to retrieve bodies and the injured from one of the mangled coaches, with the effort being hampered by lack of appropriate cutters. The Pakistan Army and the paramilitary Rangers also reached the incident site and are taking part in the rescue effort. 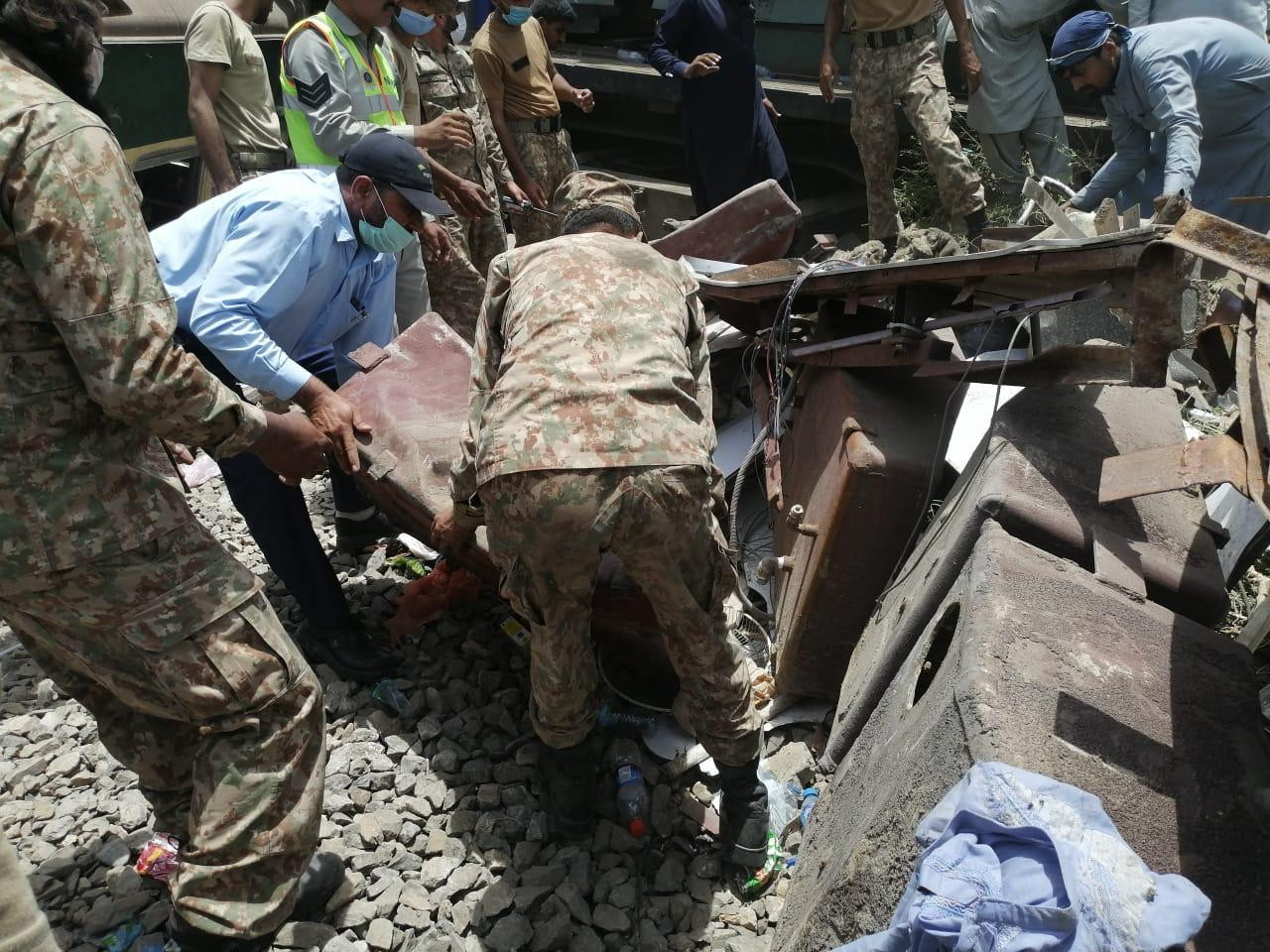 The Inter-Services Public Relations (ISPR) said military doctors and ambulances were dispatched from Pano Aqil and were participating in the rescue operation. Army engineers and specialist teams of Urban Search and Rescue (USAR) also reached the site after being airlifted from Rawalpindi to aid the effort.

The USAR teams, equipped with disc cutters, hydraulic spreaders and other specialised machinery, are taking part in the rescue operation. Rescue 1122 teams from Rahim Yar Khan are also present and aiding in the cutting of the coaches to rescue those trapped inside. 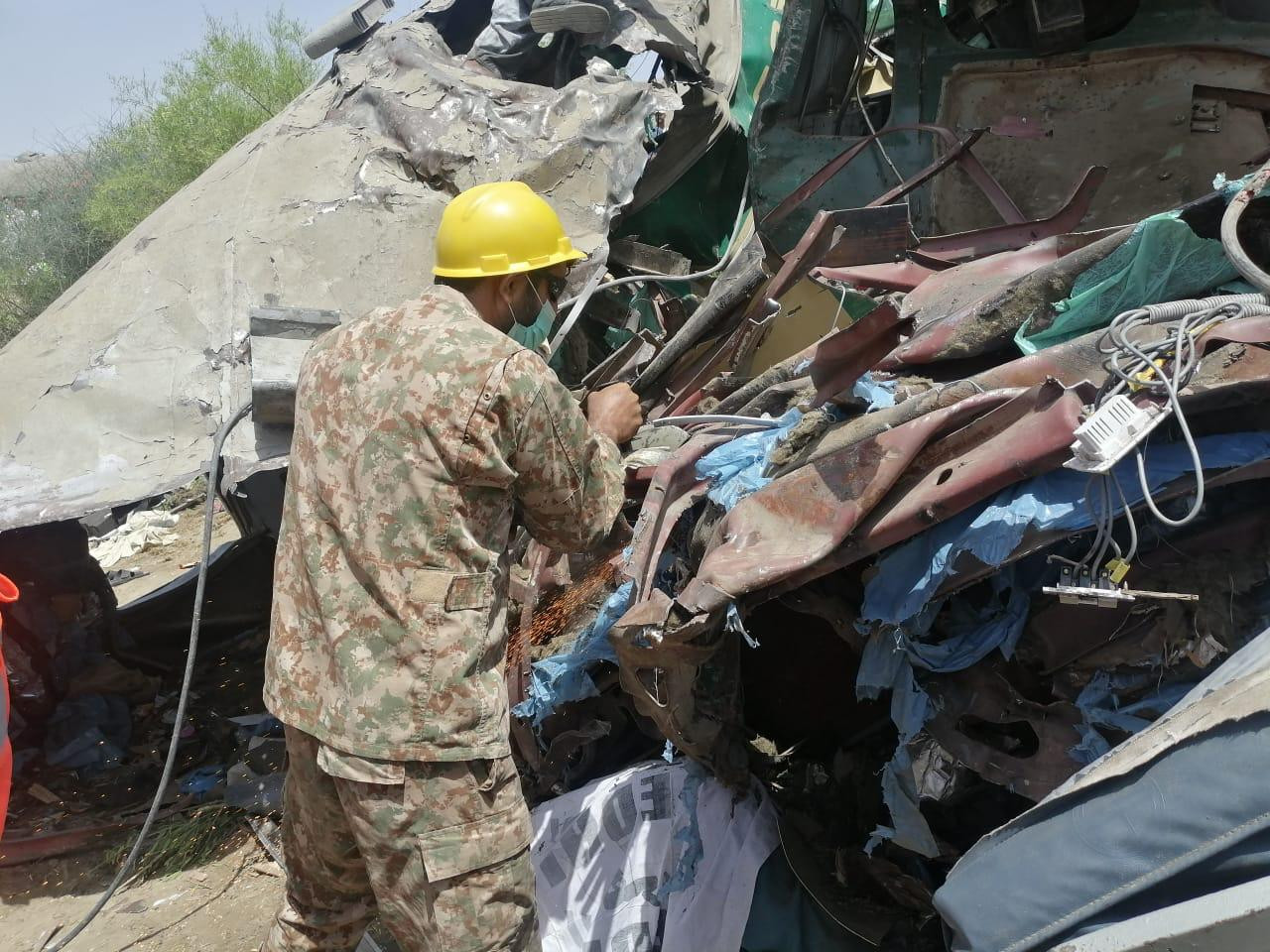 Most of the injured have been shifted to Ghotki, Rahim Yar Khan and Mirpur Mathelo, said the military’s media wing, adding that those seriously injured in the mishap were evacuated via helicopters.

A relief camp has been established by the military personnel, providing first aid and cooked meals to the passengers. 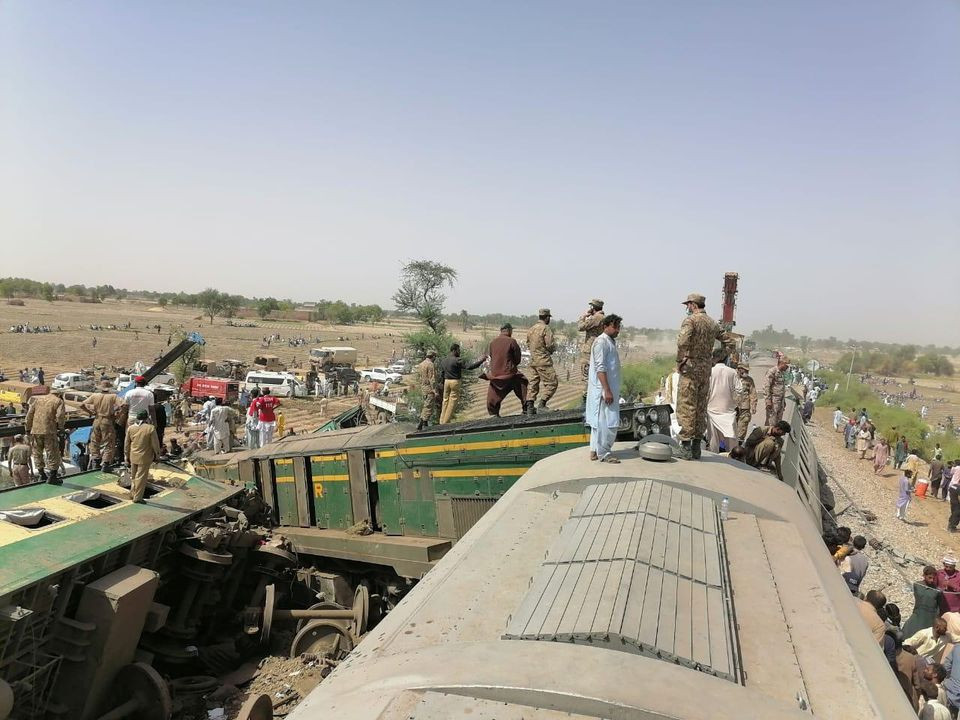 Paramilitary soldiers and rescue workers gather at the site following a collision between two trains in Ghotki. PHOTO: REUTERS

Minister for Railways Azam Khan Swati, who also reached the incident site later in the day, has taken notice of the train mishap and ordered an inquiry.

A spokesperson of the Ministry of Railways said the preliminary investigation will be completed within twenty-four hours. 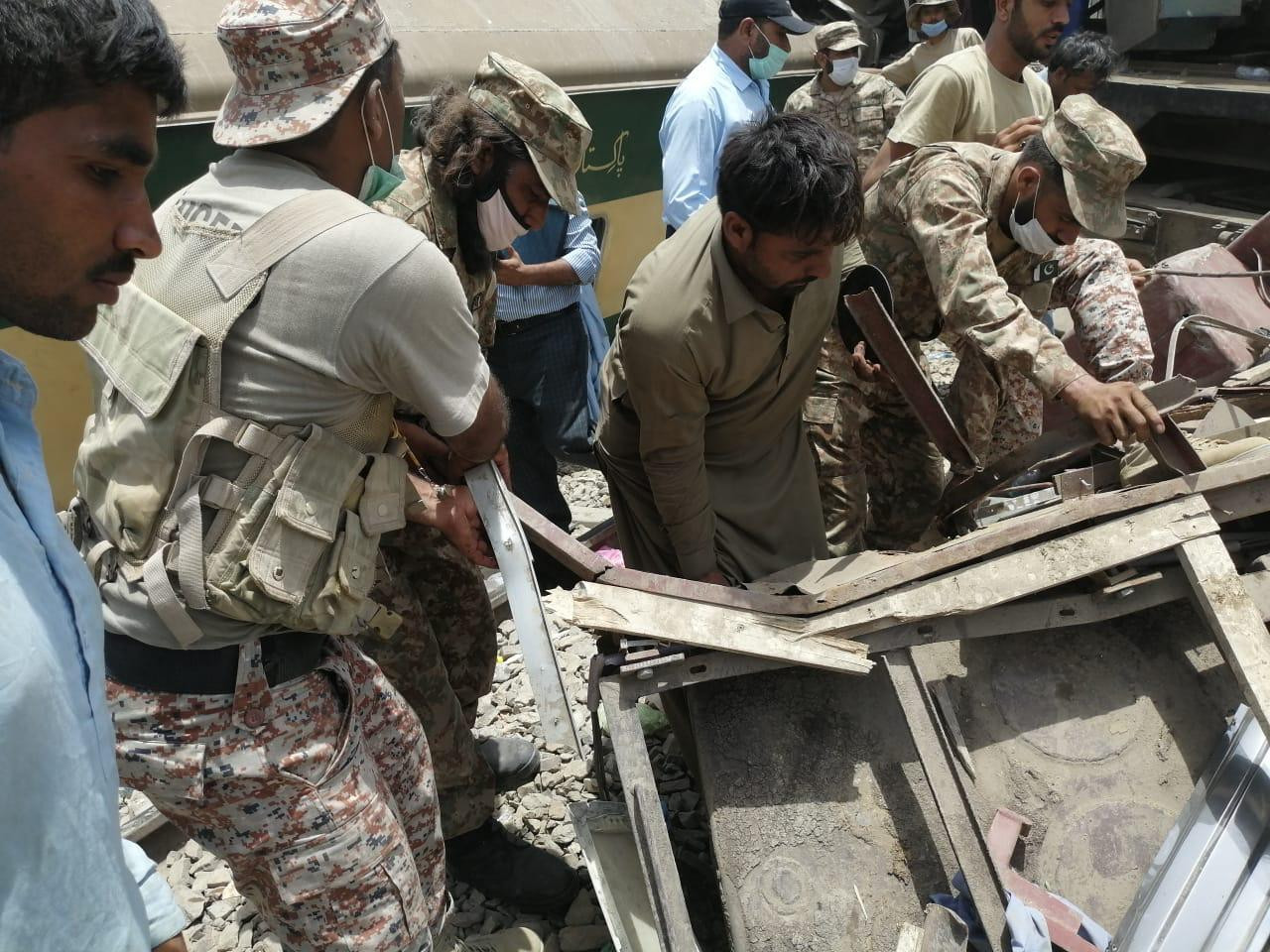 “Relief control centre established by Panu Aqil will continue till completion of relief and rescue efforts. All injured have been evacuated to various hospitals including Sheikh Zahid Hospital Rahim YAR Khan, CMH Panu Aqil,” it added.

Various trains were stopped at various stations following the incident.

Meanwhile, Sir Syed Express and Green Line departing from Karachi Cantt to Rawalpindi tonight were suspended due to technical reasons.

100% refund will be given to confirmed ticket holders, said a statement issued by the Divisional Superintendent’s office in Karachi.

Passengers who booked tickets from the reservation office are advised to get a refund from the office while those who booked online tickets can claim a refund on the PR app.

An injured passenger, who had been travelling on the train that derailed, recounted how one calamity led to another.

“We felt as if we had been thrown away,” the man, who had a bandaged head, told a television reporter from the hospital, speaking of the initial derailing of his train.

“The second train then hit our train that caused more damage,” he said.

Pakistan Railways administration said the families of those who lost their lives in the accident will receive Rs1.5 million and those injured will be given between Rs30,000 and Rs0.5 million, depending on injuries suffered.

Prime Minister Imran Khan said he was shocked by the ‘horrific accident’ and added that he had asked the railways minister to reach the site of the accident and ensure medical assistance to the injured and support for the families of those who lost their lives in the mishap.

He also said he was ordering a comprehensive investigation into “railway safety faultlines”.

As a result of the accident, railway services between Sindh and Punjab have been suspended.

The railway officials said first the casualties need to be evacuated and then the coaches would be removed. “Only after that, the rehabilitation process would commence.”

President Arif Alvi expressed sorrow over the loss of lives in the train accident and paid his respects to the families of the victims. 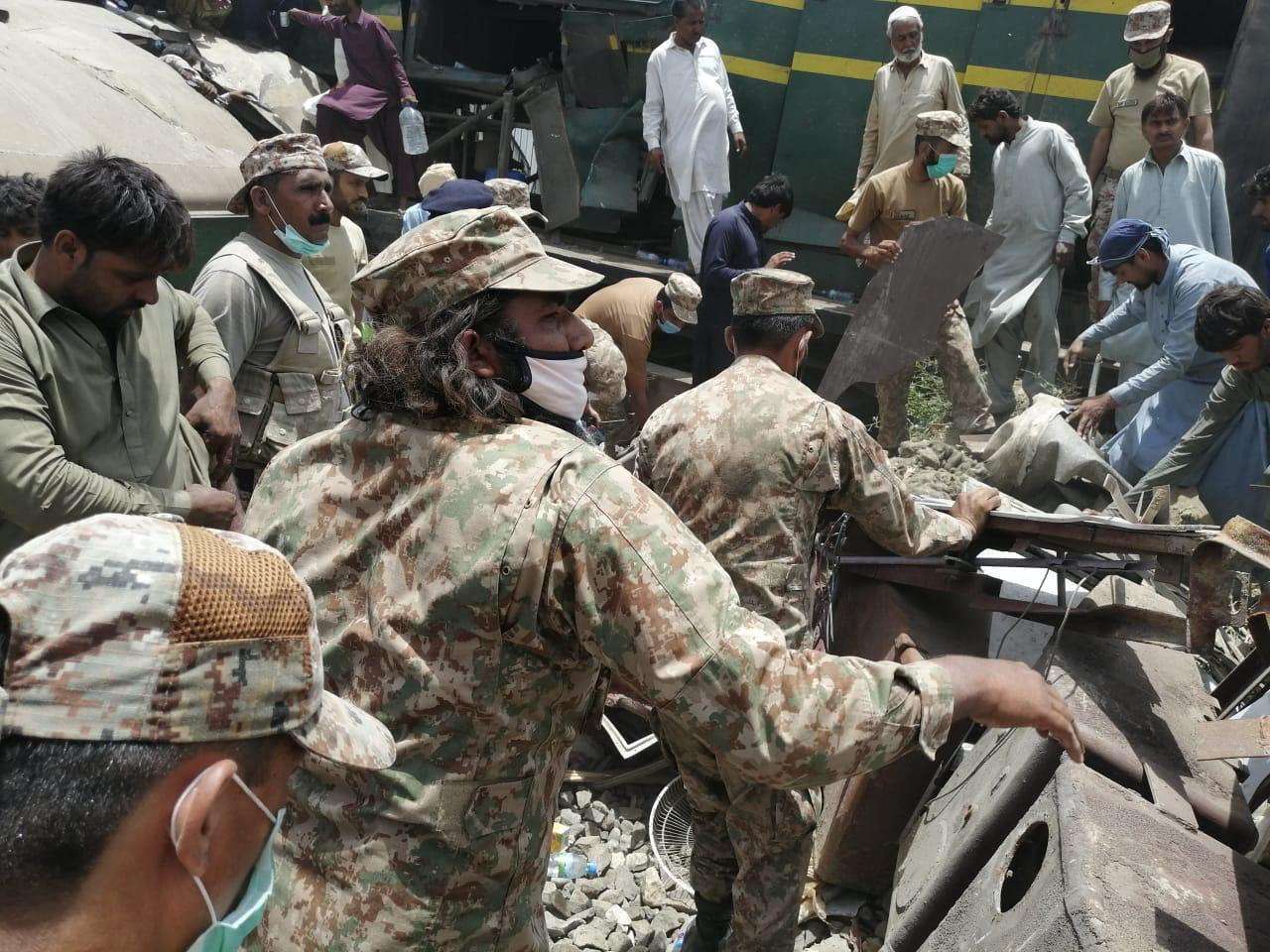 “It’s very unfortunate,” Information Minister Fawad Chaudhry said of the crash. “Our railway system has needed an overhaul for a long time.”

The chief ministers of Punjab and Sindh have also expressed their condolences on the loss of precious lives.

Expressing regret over the train accident, PPP co-chairperson Asif Zardari said that the Sindh government should take concrete steps for the rescue operation whereas the federal government should pay compensation to the families of the victims. 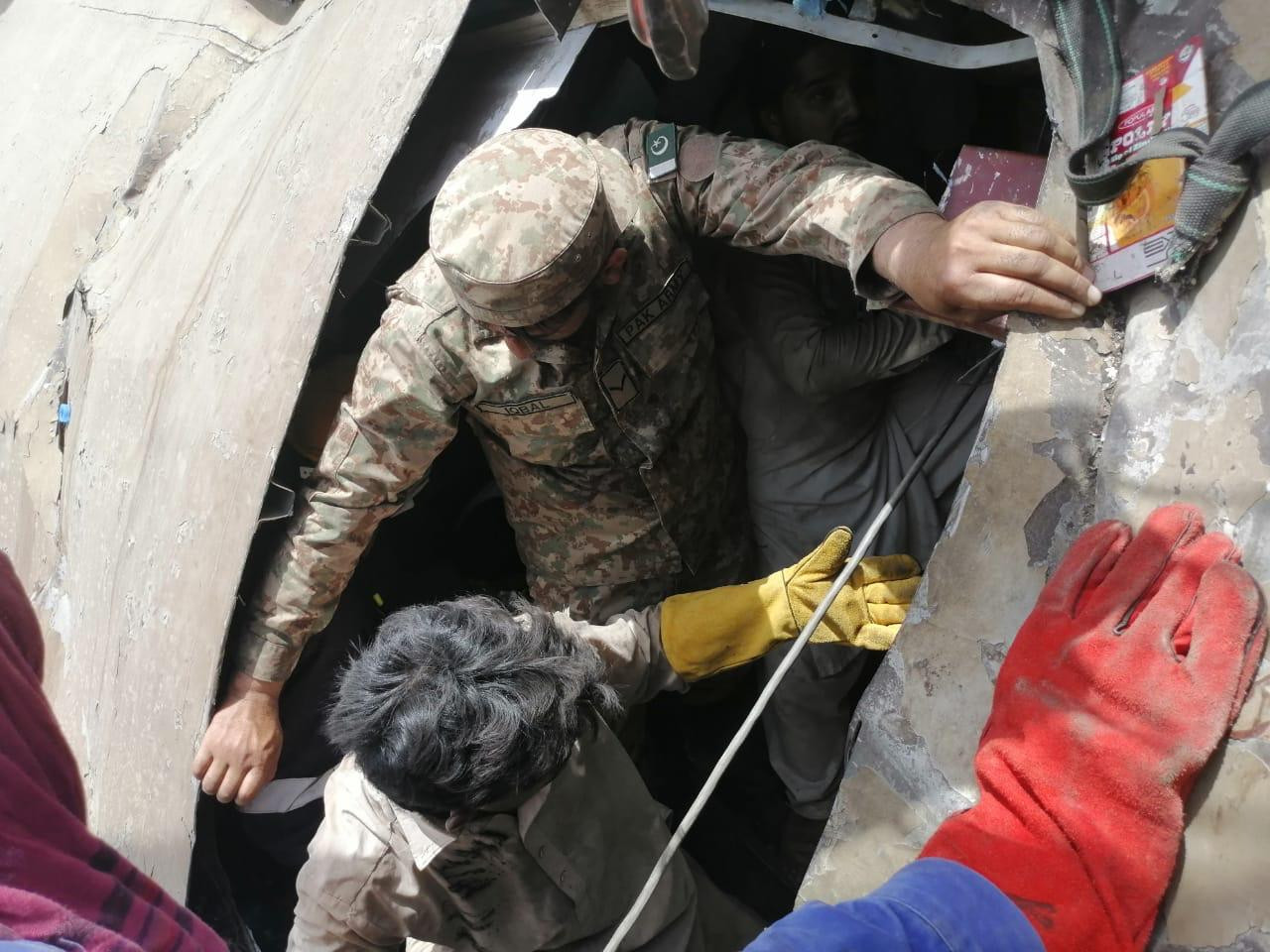 “Our thoughts and prayers are with the government, the people of Pakistan, and the families of those who have lost their dear ones in the tragic train accident. Please accept our deepest condolences and we wish for a quick recovery of the injured.”

Pakistan has a shoddy record when it comes to accidents involving trains. Accidents on the decrepit system are common.

In 2005, in the same district, about 130 people were killed when a crowded passenger train rammed into another at a station and a third train hit the wreckage.

In the past decade, the country has witnessed a number of deadly train accidents, and they seem to have increased in frequency over the past few years.

In February 2020, at least 19 people died when a train collided with a passenger bus near Rohri – also in the Sukkur division.

In October 2019, more than 70 people died in a fiery explosion on a moving train near Rahim Yar Khan, Punjab.